The Active Self: A Philosophical Study of the "Buddha Nature Treatise" and Other Chinese Buddhist Texts 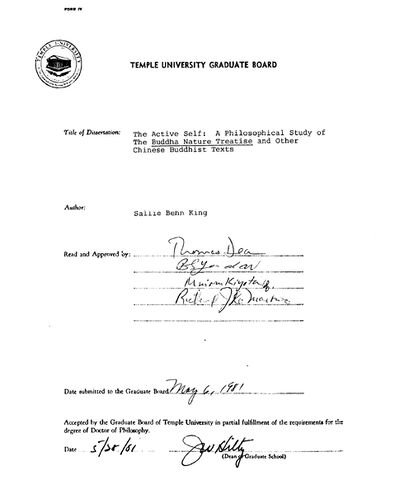 The Buddhist notion of anātman, no self, has been a source of fascination and bewilderment to Western thinkers ever since the introduction of Buddhism to the West. Yet once we accept this notion and its centrality in Buddhist thought and practice, our bewilderment is redoubled when we learn that certain texts of the tathāgatagarbha/Buddha nature lineage speak in the most positive language of such things as a Buddha nature, a pure mind and even the perfection of selfhood. How can such language be used within a tradition which places so much importance on the anātman teaching? Similarly, we are at first puzzled by the Mādhyamika teaching that everything is empty (śūnya) and that the supreme truth is emptiness. This language is the product of a man, Nāgārjuna, who is regarded as second only to the Buddha by Mahāyāna Buddhists and whose thinking forms the core of Mahāyāna philosophy. How, then, do the Buddha nature theorists intend their remarks that the Buddha nature is revealed by emptiness and that the perfections of purity, self, bliss and eternity characteristic of the dharmakāya, with which the Buddha nature is identified, are not empty (aśūnya)? Such doctrines are astonishing in the context of Mādhyamika emptiness teachings.
This study addresses these philosophical issues. What is the Buddha-nature? What is its ontological status? Why do certain texts speak of a Buddha nature? What is the place of a Buddha nature concept in the context of the history of Buddhist thought? In particular, can it be reconciled with the central teachings of anātman and śūnyatā? If so, how? In short, what does the term "Buddha nature" represent and how does it function?
I shall approach these issues through an examination of the Buddha nature concept within the context of Chinese Buddhism. The Buddha nature idea achieved a popularity and an importance in China which greatly exceeded its importance in India. China was the site of the heated and sustained "Buddha nature controversy" which revolved around the issue of whether or not all beings possess a Buddha nature. Virtually all important Buddhist schools and thinkers were obliged to commit themselves to positions on this crucial issue of the time and these positions became one of the primary criteria by which they judged each other. As a result of its being made an object of such scrutiny, the importance of the Buddha nature concept for subsequent developments of Chinese Buddhism was assured. I shall therefore be concerned toward the end of the study to consider the influences the Buddha nature concept may have had on some of these subsequent developments. (King, introduction, 1–3)

Email us to contribute
Site Guide
To top
Retrieved from "https://buddhanature.tsadra.org/index.php?title=Books/The_Active_Self:_A_Philosophical_Study_of_the_%22Buddha_Nature_Treatise%22_and_Other_Chinese_Buddhist_Texts&oldid=46783"
Categories:
Buddha-Nature