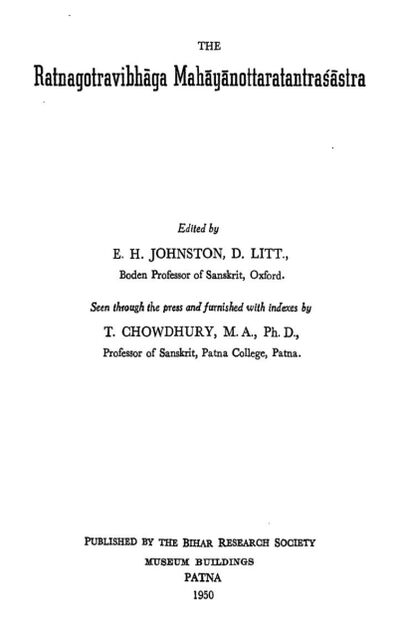 Till quite recently nothing more was known of the text edited in this volume than that, under the title of Uttaratantra, was included among the five chief works of Asaṅga by Tibetan tradition, which reported it to represent the Mādhyamika aspect of his teaching. In 1931 however a complete translation of it from Tibetan into English was published by E. Obermiller in Vol. IX, parts ii, iii and iv, of Acta Orientalia, under the title "The Sublime Science of the Great Vehicle to Salvation, being a Manual of Buddhist Monism, the work of Ārya Maitreya with a Commentary by Āryāsaṅga". A few years later Prof. Bailey discovered among the Central Asian finds a Śaka transliteration of a number of Sanskrit verses, among which I identified the first verse of chapter i and the opening verses of chapter iii.[1] The MS. gave the name of the work as Ratnagotravibhāga, thereby enabling me to adduce Chinese tradition about its authorship[2]. This tradition and the contents of the few verses thus restored caused me to doubt whether the treatise was really by Asaṅga at all and whether Obermiller had not in certain respects misrepresented its doctrinal tendencies by following modern Tibetan exegesis, which naturally endeavours to support the ascription to Asaṅga by reading his known views into the text. But while this paper was in the press, the Rev. Rāhula Sāṁkṛtyāyana published the first list of Sanskrit MSS. found by him in Tibet. These discoveries, whose importance for Buddhist learning can hardly be exaggerated, included according to him three MSS. of the Uttaratantra[1], and, as the work I had done on it had convinced me of its great value in filling a gap in our knowledge of Mahāyana developments, I asked the Bihar and Orissa Research Society for permission to edit it, a request which was most generously granted. Owing to the defectiveness of the original photographs and the necessity of obtaining new ones on a later expedition, there was some delay in undertaking the work, and the war has further postponed preparation and publication of the text.

1. Bull. LSOS, VIII, pp. 77-89. My reconstruction was only partially successful, the transliteration being imperfect and leaving much to guesswork.
2. The full name is shown by the MSS. as well as by the Tibetan and Chinese translations to be Ratnagotravibhāga Mahāyānottaratantraśāstra; the second part is merely descriptive of the scope of the work, and the first, being the proper title, is used throughout hereafter in place of the hitherto accepted Uttaratantra.
1. JBORS, XXI, pp. 31 and 33.

Email us to contribute
Site Guide
To top
Retrieved from "https://buddhanature.tsadra.org/index.php?title=Books/The_Ratnagotravibhāga_Mahāyānottaratantraśāstra&oldid=43763"
Categories:
Buddha-Nature