Açvagosha's Discourse on the Awakening of Faith in the Mahāyāna 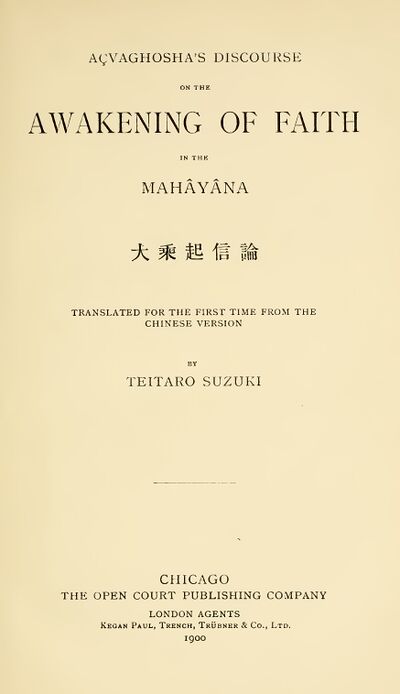 The study of Buddhism has recently made gigantic strides, on this side of the At­lantic as well as on the other. Not only is the importance of the science of comparative re­ligion making itself felt, but the advance of our Pali and Sanskrit knowledge has greatly contributed to a better understanding of things Oriental. Even Christians who were without sympathy for "heathen" religions have now taken up the study of Buddhism in earnest. Nevertheless, it appears to me that the teach­ings of Sakyamuni are not yet known in their full significance and that they do not yet com­mand just appreciation. Though intolerant critics lose no chance of vigorously and often wrongly attacking the weak points of Bud­dhism, which are naturally seen at the sur­face, clear-sighted people have been very slow to perceive its innermost truth. This is espe­cially the case with the Mahayana school.
The main reasons for this are, in my opin­ion, evident. While the canonical books of the Hinayana Buddhism have been systemat­ically preserved in the Pali language, those of the Mahayana Buddhism are scattered pro­miscuously all over the fields and valleys of Asia and in half a dozen different languages. Further, while most of the Sanskrit originals have been destroyed, their translations in Tib­etan, Mongolian, and Chinese have never been thoroughly studied. And, lastly, the Maha­yana system is so intricate, so perplexingly abstruse, that scholars not accustomed to this form of thought and expression are entirely at a loss to find their way through it
Among the false charges which have been constantly poured upon the Mahayana Bud­dhism, we find the following : Some say, "It is a nihilism, denying God, the soul, the world and all"; some say, "It is a polytheism: Avalokiteçvāra, Tara, Vajrapani, Mañjuçri, Amitābha, and what not, are all worshipped by its followers"; still others declare, "It is nothing but sophistry, quibbling, hair-split­ting subtlety, and a mocking of the innermost yearnings of humanity" ; while those who at­tack it from the historical side proclaim, "It is not the genuine teaching of Buddha; it is on the contrary the pure invention of Nāgār­juna, who devised the system by ingeniously mixing up his negative philosophy with the non-atman theory of his predecessor"; or, "The Mahayana is a queer mixture of the Indian mythology that grew most freely in the Tantric period, with a degenerated form of the noble ethical teachings of primitive Bud­dhism." Though no one who is familiar with Mahayanistic ideas will admit these one-sided and superficial judgments, the majority of people are so credulous as to lend their ear to these falsified reports and to believe them.
The present English translation of Açva­ghosha's principal work is therefore dedicated to the Western public by a Buddhist from Japan, with a view to dispelling the denuncia­tions so ungraciously heaped upon the Maha­yana Buddhism. The name of Açvaghosha is not very well known to the readers of this country, but there is no doubt that he was the first champion, promulgator, and expounder of this doctrine, so far as we can judge from all our available historical records. Besides, in this book almost all the Mahayanistic thoughts, as distinguished from the other re­ligious systems in India, are traceable, so that we can take it as the representative text of this school. If the reader will carefully and patiently go through the entire book, unmind­ful of its peculiar terminology and occasional obscureness, I believe he will be amply and satisfactorily repaid for his labor, and will find that the underlying ideas are quite simple, showing occasionally a strong resemblance to the Upanishad philosophy as well as to the Samkhya system, though of course retaining its own independent thought throughout.
In conclusion let me say a word about the difficulty of translating such an abstruse re­ligio-philosophic discourse as the present text. It is comparatively easy to translate works of travels or of historical events or to make abstracts from philosophical works. But a translator of the Mahayanistic writings, which are full of specific phraseology and highly ab­struse speculations, will find himself like a wanderer in some unknown region, not know­ing how to obtain any communicable means to express what be perceives and feels. To reproduce the original as faithfully as possible and at the same time to make it intelligible enough to the outside reader, who has perhaps never come in contact with this form of thought, the translator must be perfectly ac­quainted with the Mahayanistic doctrine as it is understood in the East, while he must not be lacking in adequate knowledge of Western philosophy and mode of thinking. The pres­ent translator has done his best to make the Mahayanistic thoughts of Açvaghosha as clear and intelligible as his limited knowledge and lack of philosophic training allow him. He is confident, however, that he has interpreted the Chinese text correctly. In spite of this, some errors may have crept into the present trans­lation, and the translator will gladly avail himself of the criticisms of the Mahayana scholars to make corrections in case a second edition of the work is needed. (Suzuki, translator's preface, x–xiv)

Mahāyāna - Mahāyāna, or the Great Vehicle, refers to the system of Buddhist thought and practice which developed around the beginning of Common Era, focusing on the pursuit of the state of full enlightenment of the Buddha through the realization of the wisdom of emptiness and the cultivation of compassion. Skt. महायान Tib. ཐེག་པ་ཆེན་པོ། Ch. 大乘