Studies in the Lankavatara Sutra (1930) 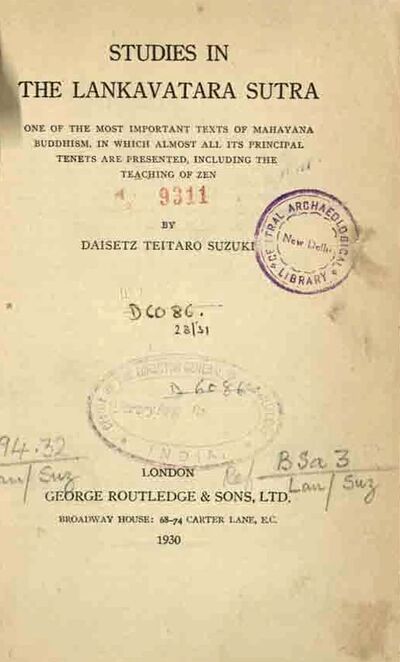 While preparing a second series of Essays in Zen Buddhism, the author thought it desirable for the reader to know something more about the Laṅkāvatāra than had been sketched out in the First Series. To do this he had to study the sutra more thoroughly, and as he was doing so, his interest in it grew stronger and wider. Then, he came to the conclusion that his study of the Laṅkāvatāra might be published independently and even prior to the second series of Zen essays. The result is this book now before the reader.
The Laṅkāvatāra is a Mahayana text difficult in more than one way to understand perfectly as to its meaning and also in Its proper historical setting. But its importance as giving most of the fundamental tenets of Mahayana Buddhism has urged the author to publish whatever results he has gained so far in his study. They are no doubt short of being quite satisfactory from a strictly scholarly point of view, but the author's earnest wish is to open the way, if he could so hope, for further study and more thoroughgoing investigation of the text. Mahayana Buddhism is just beginning to be known in the West. As to the appreciation of its full significance we have to wait patiently for some years yet to come.
The first two parts of these Studies were already published In The Eastern Buddhist, but in the present work they have been revised fully and inaccuracies corrected as far as available. The third part is entirely new. As the Studies were not planned out as a whole from the beginning but have grown progressively in the author's mind, some repetitions have become inevitable. The second part dealing with the Laṅkāvatāra containing the philosophy of Zen Buddhism was written first. As it was being revised after its publication in The Eastern Buddhist, Volume IV, Nos. 3-4, for 1928, the thought suggested itself that the sutra must be studied also textually since there are still three Chinese and one (or two) Tibetan translations. The result was the first part of the present work, which appeared as an independent article in The Eastern Buddhist, Volume V, No. 1, for 1929.
The Laṅkāvatāra does not belong exclusively to the Zen school of Buddhism, it is also the common property of the Mahayana. When it is studied apart from Zen, some of the important conceptions developed in the sutra, which do not necessarily belong to the philosophy of Zen, are to be expounded, however briefly. Hence the third part of the present Studies, entitled "Some of the Important Theories Expounded in the Laṅkāvatāra."
The author has prepared for the benefit principally of his Japanese and Cbinese readers a glossary of the Sanskrit technical terms found in the book. This he hopes to be of use in their perusal of Sanskrit Buddhist literature and at the same time illustrative of the methods of the Indian-Chinese translators. (Suzuki, preface, v–vi)

Descent into Laṅka Sūtra, a very influential text in East Asia and Nepal.

Descent into Laṅka Sūtra, a very influential text in East Asia and Nepal.