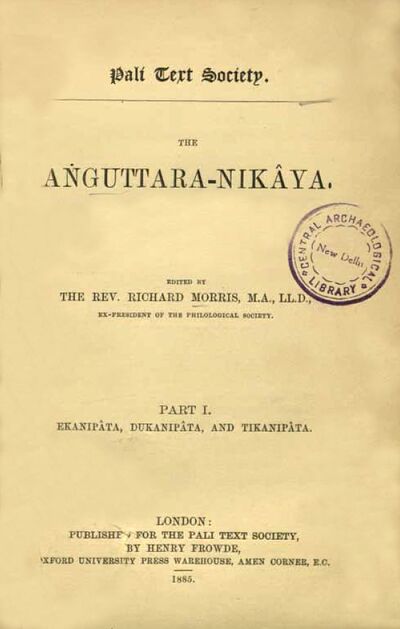 For the text of these three1 nipâtas of the Aṅgutara Nikâya I have made use of the following manuscripts:
1. T. = Turnour MS. (written in Siṅhalese character)* in the India Office Library.
2. Ba. = No. 2276 (in Siṅhalese writing) of the Oriental MSS. in the Library of the British Museum.
3. Bb.= No. 2412 (in Siṅhalese character) of the same collection.
4. Ph = Phayre MS. (in Burmese writing), in the India Office Library.
5. Com. (1.) Buddhaghosha's Commentary (Turnour collection), in the India Office Library.
6. ,, (2.) A manuscript of the above work in my own collection. It is of the same type as the Turnour copy.
7. Corn. (3.) Buddhaghosha's Commentary), prepared for me with great care by Subhûti Unnânsê. It is a very valuable and accurate manuscript, and contains many variations from (1.) and (2.).
8. D. = A MS. in my own collection purchased from Dr. Rhys Davids.
9. Tr. = A transcript (unpunctuated) of the Copenhagen MS. by Dr. Trenckner.
10. P = Paris MS. used only in the Uddânas.
Nos. 5, 6, 7, 8, 9, and 10 are all in Siṅhalese writing.
11. There is a ṭīka or subcommentary in the British Museum collection but it has not afforded me any help in settling the text of the Aṅguttara. It contains the first nipâta and the beginning of the second.

There is a very close agreement between the Siṅhalese and Burmese versions of the Aṅguttara-Nikâya; but where they essentially differ, I have, in nearly every case, given the preference to the Siṅhalese readings.
The Siṅhalese manuscripts, as Professor Fausböll long ago pointed out (Ten Jātakas, p. x), often retain older forms and expressions, which the Burmese replace by more modern, more common, and more regular ones. A few instances of this kind occur in the Aṅguttara.- Thus, for bhecchati (I. v. 1}, Ph. reads bhijjissati, and for paligheda (II. iv. 6) cleverly substitutes baligedha, in which ball gives some sense, though not the exact meaning required.
In one instance I have found in the Phayre MS. a reading borrowed from the explanation in the Commentary (See III, 65, 3, footnote 5).
In difficult or doubtful passages the Burmese manuscripts rarely render us any trustworthy assistance. Thus, for saṅkasâyanti (III. iv. 9) the reading of all the Siṅhalese copies, and sanctioned by the Saṃyutta-Nikâya, Pk reads saṅghâmayanti. l venture to think that the Siṅhalese reading is the correct one, and that it is not a mistake for saññâyanti
In some few cases the Commentary differs from the received text as in the reading atīthâtuṃ for atīyātum (II. iv. 9), and okkâcita for ukkâcita (II. v. 7). In other cases it has given us a better reading than that of the received text. See saṅkhepa, III. 62, 3.
The Chinese are said to have a work answering to the Aṅguttara-Nikâya, which Professor Beal calls the "Add-0ne-Āgama."1 We have, however, no means of verifying this statement, as we have no published specimens of a Chinese Aṅguttara to compare with the Pāli version.
In Professor Beal's "Catena of Buddhist Scriptures from the Chinese," we have some quotations from a work called the "Sian-chi-Kwan," written by Chi-kai, the founder of the Tian-tai sect. The extract on p. 258, entitled "On Chiding the Evil Desires," resembles very closely the first ten suttas of the Paṭhana-vagga (pp. 1, 2) mixed up with some commentator's remarks and illustrative stories; but the Chinese stories are not the same as those told by Buddhaghosha. The chapter on p. 261, "Casting Away Hindrances," looks much like an expansion of the Nirvāṇapahâna-vagga (I. ii. 1-10).
The Chinese may have had an Aṅguttara, but it probably bore no closer likeness to the Pāli work so called than the Dhammapada translated by Professor Beal resembles the text edited by Professor Fausböll.
In the Samacitta-vagga (II. iv. 2) of the Aṅguttara there is a very interesting little sutta on filial piety in which it is insisted that no adequate return can be made by children to their parents, even though they should perform for them the most menial offices. The sutta also points out the duty of children to look after the spiritual welfare of their parents. (see also III. 31). There seems to be some reminiscence of a northern version of this sutta in Japanese Buddhist books. The San-kai-ri quotes the Bussetsu Ko-ko-kio as the authority for the following piece of advice to dutiful children:—"Although a man should provide for his parents a hundred kinds of the choicest food suited to the palate, and though he caused their bodies to be arrayed in magnificent garments, and though he bear them on his shoulders from place to place, and furnish them with every sort of amusement and happiness, . . . beyond all this they should ever seek to induce them to render due homage to the three precious things—Buddha, Buddhist rites, and the priests—and also realize clearly their future destination."
In regard to this subject the Fubo-on Ju-kió has a remark that I have met with somowhere in Pāli, "that if one were to estimate the value of one sho (about a quart and a half) of the mother's milk, it would be more than ten thousand eight hundred and fifty kokus of rice; and if estimated in rice stalks, it would make twenty-three thousand bundles; and if calculated in linen cloth, it would be more than three thousand three hundred and seventy steps or measure" (The Chrysanthemum, a monthly magazine for Japan and the Far East, April 1882 pp. 172, 173).
In the Pāli Text Society's Journal for 1885 I have discussed the modern versions of the interesting story of "Death's Messengers" in the Devadûta-vagga III. 35, 1–4.
But of these and other interesting matters I shall have more to say when the Aṅguttara-Nikâya is completed ; the present installment, however, will show the necessity of publishing the whole as soon as possible.
The Siṅhalese MSS. contain, at the end of the Tika-nipâta, Uddânas for the first three nipâtas. The Phayre MS. has an Uddânas only for the Tika-nipâta.
The text of these Uddânas is corrupt in many places, and though it has been compared with the vaggas themselves, it is still not free from error.
The Tika-nipâta Uddâna does not go beyond the Maṅgala-vagga.
The Acelaka-vagga probably included only suttas 151, 152; so that the ten suttas 153-162 made a second vagga, while No. 163 constituted a third vagga, a mere "tag", as at the end of the Atthavasa-Vagga, II. xvii, 3, 4, 5, p. 100. (Morris, preliminary remarks, vii–xii)

1. An edition of the first two nipātas was issued by the Pāli Text Society among the publications of 1883; but it was not well received on account of the numerous contractions used in the text. In the present work only a few po's or . . . . have been employed.
1. Bunyin Nanjin, in his "Catalog of the Chinese Buddhist Canon," No. 543, gives a description of a work called T(illegible)an-yi- chān-chin (Add-one-āgama-book), which he tranlates Ekottarāgama sūtra. It was translated into Chinese by Dharmanandin, A.D 385. Judging from the titles of each chapter (varga?) it is unlike the Pāli Aṅguttara-Nikâya. It is, however, worth noting that in the Milinda-Pañba (p. 352) the Aṅguttara is alluded to as the Ekuttara-Nikâya.

Email us to contribute
Site Guide
To top
Retrieved from "https://buddhanature.tsadra.org/index.php?title=Books/The_Aṅguttara-Nikâya:_Part_1,_Ekanipâta,_Dukanipâta,_and_Tikanipâta&oldid=47802"
Categories:
Buddha-Nature