The Awakening of Faith in the Mahayana Doctrine

< Books(Redirected from The Awakening of Faith in the Mahayana Doctrine: The New Buddhism) 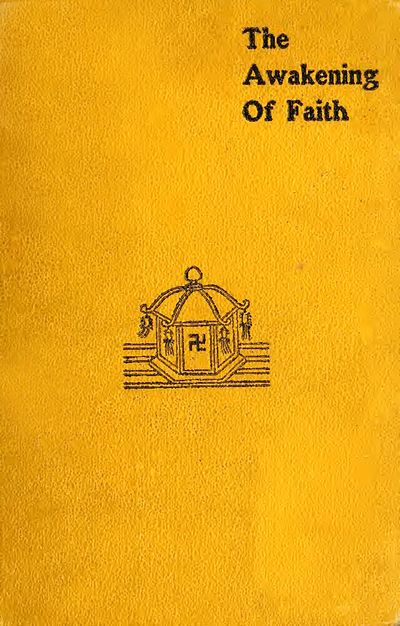 (From the translator's introduction, v–vi)
This is the title of one of the most important books in the world. A Japanese scholar has translated it The Awakening of Faith. It might also be rendered The Mahayana Faith or The Faith of the New Buddhism. Its importance is apparent when we consider the fact that of the 26,000 Buddhist monks and nuns in Japan no less than 17,000 of them belong to the Pure Land School and the True School, which regard this book as their fountain and origin.
Its importance is still more apparent when we consider that its doctrines are the fundamental ones of the Mahayana Faith, which is by far the chief school of Buddhism, not only in Japan, but also in China, where are the great majority of the Buddhists of the world. If we estimate the value of books by the number of adherents to their doctrines, then, after the Bible, the Koran, the Confucian Classics, and the Vedas, this volume, about the size of the Gospel of Mark, ranks next, or fifth, among the sacred books of the world.
The great value of the book is also apparent when we remember that the Eastern world had been driven to general despair by the atheistic doctrines of primitive Buddhism, called the Hinayana School, and that it was by the doctrines of this book, which gave rise to the Mahayana School of New Buddhism, that a gospel of great hope was preached to the greater part of the Eastern Asiatic continent. Its new doctrines were that of the One Soul immanent for good in all the universe, that of a Divine Helper of men, of individual immortality and growth in the likeness of God, of the importance of faith in God to produce good works and that of the willingness of the best spirits to make sacrifices to save others—the very subjects which in these modern days still occupy the attention of the most thoughtful men of the world. The book is Brahministic and Buddhistic, Indian and Western in some aspects of philosophic thought. It is profoundly philosophic, reminding one strongly of Hegel, Berkeley and G. Gore in the earlier part, and is as hard to understand as Bishop Butler's famous Analogy; yet very practical in the latter part, therefore it has great importance arising from its high and extensive range of view.
If it be, as it is more and more believed that the Mahayana Faith is not Buddhism, properly so-called, but an Asiatic form of the same Gospel of our Lord and Saviour Jesus Christ, in Buddhistic nomenclature, differing from the old Buddhism just as the new Testament differs from the old, then it commands a world-wide interest, for in it we find an adaptation of Christianity to ancient thought in Asia, and the deepest bond of union between the different races of the East and the West, viz., the bond of a common religion. Both Christianity and the New Buddhism hold to the transcendent and the immanent forms of God; but the East emphasises more of the immanent form while the West emphasises more of the transcendent. The almost universal reception of the doctrines contained in this book by both the East and the West constitutes to my mind its highest claim to our attention; for thereby we are brought face to face with a solution of the stupendous practical problem of uniting all races in one bond of religious charity!

The doctrine of buddha-nature in Chinese Buddhism
Dasheng qixin lun

Email us to contribute
Site Guide
To top
Retrieved from "https://buddhanature.tsadra.org/index.php?title=Books/The_Awakening_of_Faith_in_the_Mahayana_Doctrine&oldid=42488"
Categories:
Buddha-Nature