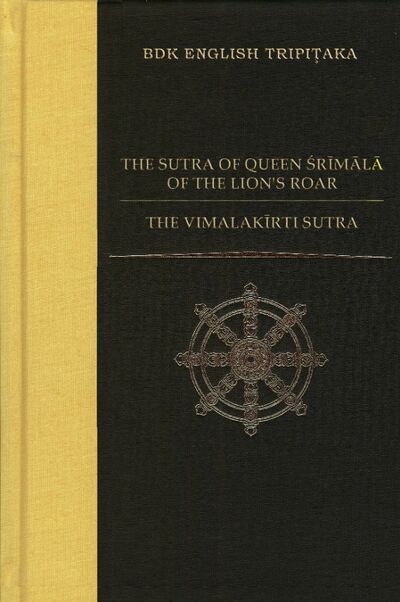 The Sutra of Queen Śrīmālā of the Lion's Roar

The Sutra of Queen Śrīmālā of the Lion's Roar, generally known by its abbreviated title of Śrīmālā-sūtra, was expounded by Śrīmālā, the daughter of King Prasenajit of Śrāvasti, under the inspiration of Śākyamuni. Its important subjects include the theory of the “One True Vehicle” and the dharmakāya. Distinguished from other sūtras with the leading role played by a woman, and with the guarantee given by Śākyamuni therein, the text celebrates the potential of all people to become Buddhas and provides textual authority to counteract cultural gender bias.

In Japan this sūtra is further distinguished by the commentary (Taishō 106) attributed to Prince Shōtoku, included in his “Commentaries on Three Sūtras” (Jp. San-gyō gi-sho).

In The Vimalakīrti Sutra the protagonist is a layman by the name of Vimalakīrti, well-versed in the profundities of Mahāyāna Buddhism. He happens to fall ill, and the sūtra starts from the point where Śākyamuni, hearing of his illness, asks his disciples to go to visit him. However, since each of the disciples has in the past been got the better of by Vimalakīrti in some way or other, they all refuse to go; so in the end it is Mañjuśrī who agrees to visit him in their stead. As a result a discussion on the profound teachings of the Mahāyāna unfolds between Vimalakīrti and Mañjuśrī. This sūtra is held in high regard in Japan, not least because Prince Shōtoku included a commentary on it (Taishō 107) in his Commentaries on Three Sūtras (San-gyō-gi-sho). Beyond that, the text has considerable appeal due to its dramatic contents, and is an important key to an understanding of the profound thought of Mahāyāna Buddhism.

One of the more prominent sūtra sources for the Uttaratantra, this text tells of the story of Śrīmālādevī taking up the Buddhist path at the behest of her royal parents based on a prophecy of the Buddha.