A Buddha Within: The Tathāgatagarbhasūtra

< Books(Redirected from A Buddha Within: The Tathāgatagarbhasūtra; The Earliest Exposition of the Buddha-Nature Teachings in India) 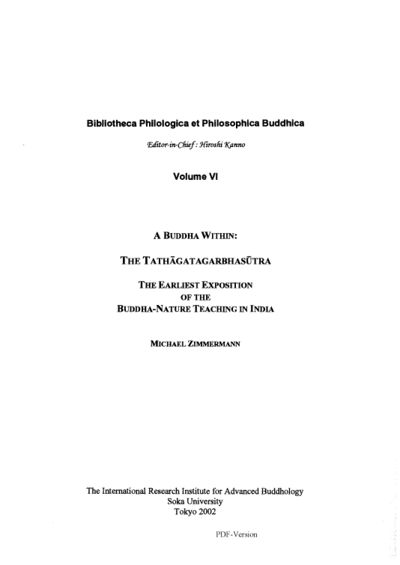 A Buddha Within is a study and translation of the Tathāgatagarbha Sūtra, one of the earliest Indian scriptures to promote buddha-nature. The short sūtra contains nine similes for buddha-nature that can be divided into two categories: potential and perfected. These include the metaphor of a seed and gold hidden under a poor person's house. In the first, buddha-nature must be grown and developed; in the second, it is already perfected and must only be revealed. In both cases, however, buddha-nature is already present, and no fundamental transformation is needed to become a buddha: the promise is made that buddhahood is already present in all sentient beings. Zimmerman argues that the sūtra is best read as an ethical treatise, an encouragement to pursue enlightenment.

The first one hundred pages of the book are Zimmerman's commentary on the sūtra and its place in Indian, Chinese, and Tibetan Buddhism. He argues that there were two recensions of the scripture in India, the earliest of which went to China, and the later translated fourteen times into Tibetan. Key to his argument is that the Chinese translations do not contain the first simile of a pure white lotus growing in a muddy swamp. This, the sole passage to use the terms tathāgatagarbha, was thus added later, after the term had gained popularity.

Zimmerman surveys the doctrinal issues raised by the scripture, including the relationship between buddha-nature theory and Yogacāra in China, and zhentong and rangtong in the Tibetan context. The remainder of the book is an analysis of each recension and translation, an English translation incorporating all recensions and translations, and a critical edition of the Tibetan and Chinese. There is no surviving Sanskrit version.

Son of a good family, the True Nature (dharmatā) of the dharma is this: whether or not tathāgatas appear in the world, all these sentient beings contain at all times a tathāgata. Mahāyānottaratantraśāstra verse 73 line 11-12.

~ Buddha in A Buddha Within: The Tathāgatagarbhasūtra, page(s) 40

The Tathāgatagarbhasūtra (TGS) is a relatively short text that represents the starting point of a number of works in Indian Mahayana Buddhism centering around the idea that all living beings have the buddha-nature. The genesis of the term tathāgatagarbha (in Tibetan de bzhin gshegs pa 'i snying po, in Chinese rulai zang 如來藏), the key term of this strand of Buddhism and the title of the sūtra, can be observed in the textual history of the TGS.

~ Zimmermann, M. in A Buddha Within: The Tathāgatagarbhasūtra, page(s) 7

An important sūtra source for the Ratnagotravibhāga, particularly for its discussion of the nine examples that illustrate how all sentient beings possess buddha-nature.

An important sūtra source for the Ratnagotravibhāga, particularly for its discussion of the nine examples that illustrate how all sentient beings possess buddha-nature.