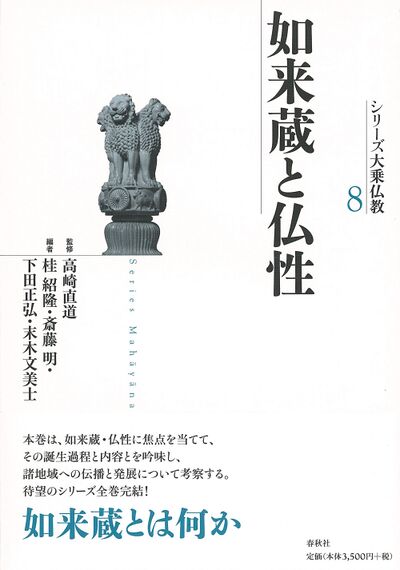 This book is part of a 10-volume "Series on Mahayana Buddhism" published between 2011 and 2014. The series consists of the contributions of over seventy authors from Japan and other countries. Mahayana Buddhism is an ideological movement that came into existence in the early years of the first millennium CE through the inheritance of the teachings of Buddhism as developed by the Buddha in India in the fifth century BCE, as well as through the development of new sutras both during and since that time. Throughout the following several hundred years, Mahayana Buddhism played a major role in deepening the development of Buddhist thought, particularly regarding epistemology and ontology. Tathāgatagarbha and Buddha nature, the themes of this book, are ideas developed in the final stages of Mahayana Buddhism, which had a significant effect on the formation of Buddhist thought in East Asia and Tibet. Especially in China, Mahayana Buddhism has received attention for both merging with the philosophy of Huayan Buddhism and for affecting the theoretical form of Neo-Confucianism, as well as for providing theoretical support for the leaders of the Xinhai Revolution.
Tathāgatagarbha and Buddha nature are technical terms that indicate the existence of the true nature of the Buddha or Tathāgata who has attained enlightenment through totally unclouded insight (prajñā), within all living things, though these living things may be covered with the impurity of worldly desire and be seemingly incapable of attaining enlightenment. In essence, these terms refer to the fact that the Buddha or Tathāgata resides within the nature of all living things. The notions of Tathāgatagarbha and Buddha nature make assertions about the nature of enlightenment or salvation for living things still trapped in an unenlightened condition of suffering. They do so from the ideological position of those Tathāgatas or Buddhas who have already realized truth and been released from suffering and unenlightenment. These ideas are expressed as a kind of theodicy and soteriology, as they deal with the challenge of how super-temporal, absolute truth appears at a historical or personal level. Ideas that originate in the mature period of the history of an ideology produce higher-level notions that allow concepts born in various contexts in the previous history of the ideology to coexist. The ideas of Tathāgatagarbha and Buddha nature, which point to the Tathāgata or Buddha that dwells within all living things, encompass both all living things and Tathāgata, and so exist at a higher conceptual level than either.
There are two foundations of the ideas of Tathāgatagarbha and Buddha nature, which simultaneously problematize both unenlightenment and enlightenment: the features of soteriology in general religious thought, and the view of truth that is unique to Buddhism. Soteriology, as conceived of in general religious thought, considers the world in a dualistic fashion, as being split into the world of humanity and the world of gods, the world of suffering and the world of liberation, the endless cycle of life and death (samsara) and supreme enlightenment (nirvana). On the one hand is a relative, limited, and impermanent world, and on the other an absolute, infinite, and eternal world. The movement from the former aspect to the latter is not ceaseless but, rather, requires a change in the dimension of our existence, such as religious conversion or enlightenment. The experience of the individual transforms the aspect of the world, which formerly appeared as a single layer, thus exposing its mysterious and unseen facets. In contrast to many religions, which end their exposition at this point, Mahayana Buddhism takes the appearance of this duality itself as a subjective experience and seeks to reach the point at which both aspects ultimately become indistinguishable. The scenery of this world as seen from the world of libreration, worldly desire purified by enlightenment, Samsara illuminated by nirvana are all accepted as they are, without the necessity of any negation or denial. The duality of the world is therefore overcome, and a higher-level equality emerges that still acknowledges individual differences. (Source Accessed June 29, 2020)

prajñā - One of the key terms for wisdom or knowledge, most often having the sense of insight, transcendent knowledge, or perhaps gnosis. In some contexts it can also refer to cognition or intellectual understanding. Skt. प्रज्ञा Tib. ཤེས་རབ་ Ch. 般若

paramārthasatya - "Ultimate truth" or "absolute truth"; the reality of things as they truly are. Skt. परमार्थसत्य Tib. དོན་དམ་བདེན་པ་ Ch. 第一義諦