< Books(Redirected from Buddha Nature: Our Potential for Wisdom, Compassion and Happiness) 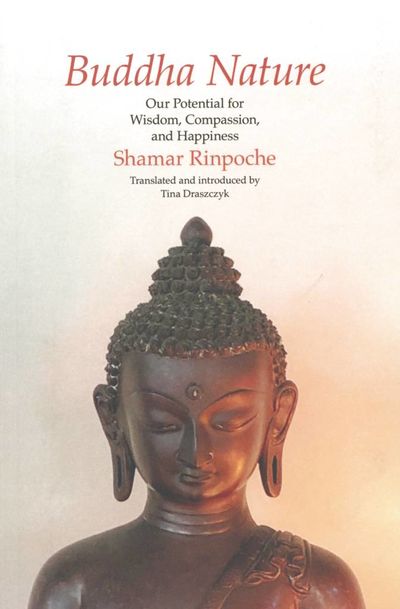 This book contains the teachings on buddha nature given by the 14th Shamarpa, Mipham Chokyi Lodro (1952-2014), in Dhagpo Kagyu Ling, France, in the year 1988. In a very inspiring way he clearly pointed to what really counts: the heart of awakening is nothing other than our true nature and therefore all of us, in fact every sentient being, can awaken to his or her buddha qualities.

The Shamarpa based his explanations on the text Revealing Buddha Nature composed by the 3rd Karmapa, Rangjung Dorje (1284-1339), which sums up Maitreya/Asaṅga's Ultimate Continuum, that is, the Uttaratantraśāstra, also known as the Ratnagotravibhāga. This latter treatise is considered to reflect the meaning of the so-called third and final cycle of the Buddha's teachings, which is mainly concerned with buddha nature and its qualities.

The first part of this book consists of the Shamarpa's instructions, which at the time were orally translated from the Tibetan by Lama Rinchen, a long-time meditator, translator, and retreat-master, based in France. . . . The second part of this book presents a translation of Revealing Buddha Nature by Karmapa Rangjung Dorje, the text on which these teachings are based. (Draszczyk, preface, xi)

Kagyu - The Kagyu school traces its origin to the eleventh-century translator Marpa, who studied in India with Nāropa. Marpa's student Milarepa trained Gampopa, who founded the first monastery of the Kagyu order. As many as twelve subtraditions grew out from there, the best known being the Karma Kagyu, the Drikung, and the Drukpa. Tib. བཀའ་བརྒྱུད་

Uttaratantra - The Ultimate Continuum, or Gyü Lama, is often used as a short title in the Tibetan tradition for the key source text of buddha-nature teachings called the Ratnagotravibhāga of Maitreya/Asaṅga, also known as the Mahāyānottaratantraśāstra. Skt. उत्तरतन्त्र Tib. རྒྱུད་བླ་མ་ Ch. 寶性論