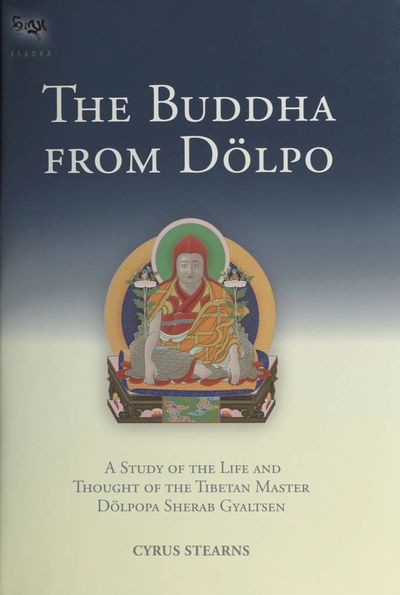 The Buddha from Dölpo is a revised and enlarged edition of the only book about the most controversial Buddhist master in the history of Tibet, Dölpopa Sherab Gyaltsen (1292-1361), who became perhaps the greatest Tibetan expert of the Kālacakra, or Wheel of Time, a vast system of tantric teachings. Based largely on esoteric Buddhist knowledge from the legendary land of Shambhala, Dölpopa's insights have profoundly influenced the development of Tibetan Buddhism for more than 650 years.

Dölpopa emphasized two contrasting definitions of the Buddhist theory of emptiness. He described relative phenomena as "empty of self-nature," but absolute reality as only "empty of other," i.e., relative phenomena. He further identified absolute reality as the buddha nature, or eternal essence, present in all living beings. This view of an "emptiness of other," know in Tibetan as shentong, is Dölpopa's enduring legacy.

The Buddha from Dölpo contains the only English translation of three of Dölpopa's crucial works. A General Commentary on the Doctrine is one of the earliest texts in which he systematically presented his view of the entire Buddhist path to enlightenment. The Fourth Council and its Autocommentary (which was not in the first edition of this book) were written at the end of his life and represent a final summation of his teachings. These translations are preceded by a detailed discussion of Dölpopa's life, his revolutionary ideas, earlier precedents for the shentongview, his unique use of language, and the influence of his theories. The fate of his Jonang tradition, which was censored by the central Tibetan government in the seventeenth century but still survives, is also examined. (Source: Shambhala Publications)

A Historical Survey of the Shentong Tradition in Tibet

Book Excerpt
This is essential reading for understanding Dölpopa's position on buddha-nature.

Dölpopa considers the buddha nature, or sugata essence, to be natural luminosity (which is synonymous with the dharmakāya) and a primordial, indestructible, eternal great bliss inherently present in every living being.

Dölpopa considers the buddha nature, or sugata essence, to be natural luminosity (which is synonymous with the dharmakāya) and a primordial, indestructible, eternal great bliss inherently present in every living being. On the other hand, the incidental stains or impurities that veil the buddha nature are the various states of mind associated with the infinite experiences of mundane existence. While the veils of temporary affliction are empty of self-nature, the buddha nature is empty only of phenomena other than itself.

According to Dölpopa the process of enlightenment can be illuminated by some traditional examples. First, he accepts two types of "universal groung" (aālaya, kun gzhi). Of these, he considers the buddha nature, or sugata essence, to be the "universal-ground primoridal awareness" (kun gzhi ye shes). While still veiled by the temporary obscurations, of the afflictions and of knwledge, ths is like the sky filled with clouds or a jewel covered with mud. In contrast, the "universal-ground consciousness" (ālayavijñāna, kun gzhi rnam shes) is the impurities or incidental stains that are to be removed, and the deeply imprinted habitual propensities associated with it. Thes are like the clouds in the sky or the mud covering the jewel. Second, the path is composed of the various techniques of practice that removed the impurities. This path can be likened to the wind that scatters the clouds of the stream of water that washes the mud from the jewel. Finally, the result is described as an attainment, but is really unified bliss and emptiness, a self-arisen primordial awareness that is eternally present, but now manifests or actualizes. This is like the appearance of the clear cloudless sky or the jewel separated from the mud. Dölpopa says the incidental stains must be understood as empty of self-nature and suitable to be removed through meditation practice, while the buddha nature itself is empty only of other extrinsic factors such as the incidental stains that veil its eternal and indestructible nature.

Kālacakra - Can refer to either the Kālacakra Tantra and its derivative texts or to the systematic tantric tradition based on these texts, as well as the deity Kālacakra upon which the associated practices are centered. Skt. कालचक्र Tib. དུས་ཀྱི་འཁོར་ལོ། Ch. 時輪

Kālacakra - Can refer to either the Kālacakra Tantra and its derivative texts or to the systematic tantric tradition based on these texts, as well as the deity Kālacakra upon which the associated practices are centered. Skt. कालचक्र Tib. དུས་ཀྱི་འཁོར་ལོ། Ch. 時輪

svabhāva - The nature or essence of a thing, which originates only from itself and is not dependent on any external entities, causes, or conditions. Skt. स्वभाव Tib. རང་བཞིན་ Ch. 自性

Jonang - The Jonang tradition was established by Dölpopa Sherab Gyaltsen, a thirteenth-century Sakya monk famous for his Zhentong teachings. The Jonang teachings and monasteries were suppressed in Tibet in the seventeenth century but survived in Amdo. Tib. ཇོ་ནང་

prabhāsvaratā - In a general sense, that which clears away darkness, though it often appears in Buddhist literature in reference to the mind or its nature. It is a particularly salient feature of Tantric literature, especially in regard to the advanced meditation techniques of the completion-stage yogas. Skt. प्रभास्वर Tib. འོད་གསལ་ Ch. 光明

kun gzhi - Although it is commonly used as an abbreviation of ālayavijñāna (kun gzhi'i rnam shes), in later Tibetan traditions, particularly that of the Kagyu and the Nyingma, it came to denote an ultimate or pure basis of mind, as opposed to the ordinary, deluded consciousness represented by the ālayavijñāna. Alternatively, in the Jonang tradition, this pure version is referred to as ālaya-wisdom (kun gzhi'i ye shes). Skt. आलय Tib. ཀུན་གཞི་

kleśa - Often referred to as poisons, these are a class of disturbing or disruptive emotional states that when aroused negatively affect or taint the mind. Skt. क्लेश Tib. ཉོན་མོངས་ Ch. 煩惱

ālayavijñāna - A neutral base consciousness that is posited as the storehouse for the seeds of past karmic actions in which they remain in a latent state until the circumstances arise for them to ripen as karmic consequences. Skt. आलयविज्ञान Tib. ཀུན་གཞིའི་རྣམ་ཤེས་ Ch. 藏識