The Lion's Roar of the Ultimate Non-Dual Buddha Nature

< Books(Redirected from The Lion's Roar of the Ultimate Non-Dual Buddha Nature: A Text by Ju Mipham Namgyal and Explanation by Tony Duff) 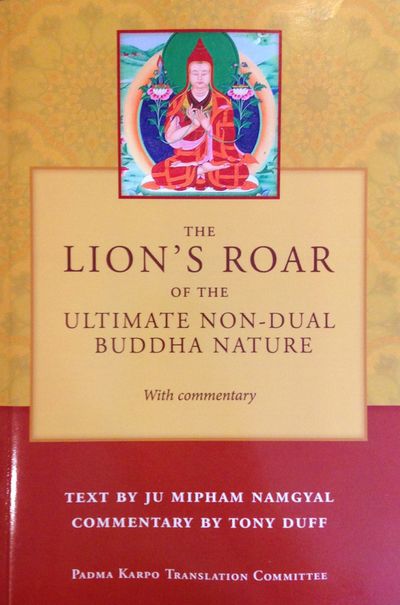 The teaching of the Buddha hinges around the one point that sentient beings, meaning beings having a mind, have within them the potential to become a buddha. If they did not possess that potential, it would not be possible for them to become buddhas and the rest of the Buddhist teaching would be an interesting but useless philosophy. Therefore, the topic of buddha nature is especially important.

The Buddha taught buddha nature in three steps, each more profound than the previous one. The last step is regarded by most Tibetan Buddhist schools as the most profound teaching of the sutras, the very essence of what the Buddha was trying to communicate to his followers. It is the same teaching as found in Mahamudra and Dzogchen, so is important for all Buddhists to understand, but especially for those who are studying the Mahamudra and Dzogchen teachings.

The very learned Nyingma teacher Ju Mipham Namgyal gave a teaching that clearly showed this ultimate non-dual buddha nature. It was recorded and published by his students in a text called The Lion's Roar that is A Great Thousand Doses of Sugatagarbha which forms the basis of this book. The text needs clarification, so a very extensive explanation has been provided by the author of the book, the well known Western Buddhist teacher and translator, Tony Duff. As with all of our books, and an extensive introduction, glossary, and so on are provided to assist the reader.