The Uttaratantra in the Age of Argumentation: Dolpopa Sherab Gyaltsen and His Fourteenth-Century Interlocutors on Buddha-Lineage

< Books(Redirected from The ''Uttaratantra'' in the Age of Argumentation: Dolpopa Sherab Gyaltsen and His Fourteenth-Century Interlocutors on Buddha-Lineage) 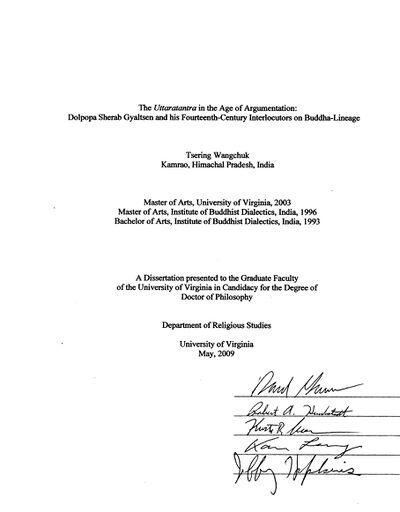 This dissertation examines the intellectual history of the Uttaratantra in Tibet from the 12th century to the early 15th century. It is between these centuries that the text, which is one of the most authoritative works on the notion of tathāgata-essence, takes its shape in Tibet through the writings of some of the most formidable Tibetan thinkers of the time. Their works that directly relate to the discourse of the Uttaratantra may have one theme—the concept of tathāgata-essence—in common, but the ways in which they expound on the Uttaratantra strongly diverge from each other and often stand as polar opposites. Some of the major questions that I address in the dissertation are as follows: Does the Uttaratantra primarily explain the ultimate truth or not? Is it a Mind-Only treatise or a Middle Way treatise? Is it a Middle Wheel or Last Wheel text? Does it explicate other-emptiness or self-emptiness? How is the relationship between the Uttaratantra and Candrakīrti's Madhyamakāvatāra delineated? How do the Tibetan scholars mentioned below justify their respective positions on the Uttaratantra and criticize the claims made by other scholars? In answering these questions I read and translated many Tibetan sources in order to ascertain and portray the best possible context, that is, the field in which the battle of scholastic debates emerged.
The first two chapters of my dissertation explore some of the above questions by analyzing Tibetan texts written by Ngok, Chapa, Sapen, Jayānanda, Chomden Rigrel, Rinchen Yeshi, the Third Karmapa, and others, between the 12th and early 14th centuries. Although these scholars argued intensely over the significance or insignificance of the Uttaratantra within the Mahāyāna literature, the Uttaratantra had yet to see the climax of the argumentation, which takes place in the 14th and early 15th centuries, the era that I call the argumentation period of the Uttaratantra. For this era, I analyze the works by Dolpopa, Buton, Dratsepa, Gyalse Thogmey, Longchenpa, Sazang, Rendawa, Tsongkhapa, and Gyaltsab. Thus, this dissertation examines the intellectual history of a text that has, to some extent, been overshadowed by the Madhyamakāvatāra in the contemporary Tibetan scholastic tradition.

Email us to contribute
Site Guide
To top
Retrieved from "https://buddhanature.tsadra.org/index.php?title=Books/The_Uttaratantra_in_the_Age_of_Argumentation:_Dolpopa_Sherab_Gyaltsen_and_His_Fourteenth-Century_Interlocutors_on_Buddha-Lineage&oldid=48193"
Categories:
Buddha-Nature