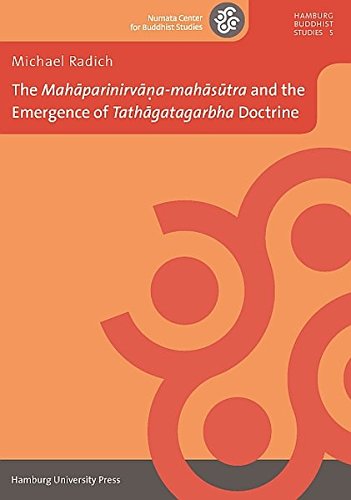 Famously, tathāgatagarbha doctrine holds that every sentient being has within the body a womb for Buddhas, or an embryonic Buddha – the potential for full buddhahood. Previous scholars have seen this doctrine as originating in the Tathāgatagarbha-sūtra. In this book, Michael Radich argues that rather, the Mahāparinirvāṇa-mahāsūtra is most likely our earliest extant tathāgatagarbha text. Radich then argues that tathāgatagarbha ideas originated as part of a wider pattern of docetic Buddhology – ideas holding that Buddhas are not really as they appear. Buddhist docetic texts are clearly troubled by the notion that Buddhas could have flesh-and-blood human mothers. The Mahāparinirvāṇa-mahāsūtra is one such text, and tathāgatagarbha functions as a better substitute for imperfect human maternity: rather than a putrid, painful human womb, buddhahood springs from a “womb” inherent in every sentient being, which promises final liberation from flesh altogether. This book should interest readers concerned with the history of Buddhist ideas, gender in Buddhism, the early Mahāyāna, the cult of the Buddha’s relics, and relations between Buddhist ideas and practice. (Source: Hamburg University Press)

Michael Radich argues that the Mahāparinirvāṇasūtra was the first appearance of the term tathāgatagarbha. Previous scholars have assumed that the term first appeared in the Tathāgatagarbhasūtra, although as Radich's thesis advisor Michael Zimmermann has argued, the term was possibly added to the scripture that uses it in its title only in later versions. Radich's argument in this way buttresses Zimmerman's, which has been disputed by other scholars. His thesis rests partly on the Mahāparinirvāṇasūtra's unique exposition of the term, one that was not repeated elsewhere.

In this scripture, tathāgatagarbha is not an exhortation to practice, or a means to soothe fears of nihilism. Instead, it is an explanation of how a perfectly pure being such as a buddha could arise out of a polluted and degraded human being. It would seem that early Mahāyāna Buddhists had a misogynistic crisis similar to that of early Christians: an inability to accept that their divine hero could have been born from a woman. Radich places this intellectual struggle within a context of "docetic Buddhism," meaning the attempt to explain that what one sees—the Buddha in a body—is not what is ultimately real; appearances are always deceiving. Similar to the way Yogācāra built on emptiness-theory with positive descriptions of the ultimate, the Mahāparinirvāṇasūtra, Radich argues, offered a positive solution to the origin of buddhahood: because buddhas could not be generated out of a human womb, they were given metaphorical wombs—garbha —that are present in all sentient beings. Radich presents his argument alongside meticulous and extensive textual analysis to support his dating of the Mahāparinirvāṇasūtra to earlier than the Tathāgatagarbhasūtra.
More on this item Close

Mahāyāna - Mahāyāna, or the Great Vehicle, refers to the system of Buddhist thought and practice which developed around the beginning of Common Era, focusing on the pursuit of the state of full enlightenment of the Buddha through the realization of the wisdom of emptiness and the cultivation of compassion. Skt. महायान Tib. ཐེག་པ་ཆེན་པོ། Ch. 大乘

Yogācāra - Along with Madhyamaka, it was one of the two major philosophical schools of Mahāyāna Buddhism. Founded by Asaṅga and Vasubandhu around the fourth century CE, many of its central tenets have roots in the Saṃdhinirmocanasūtra and the so-called third turning of the dharma wheel (see tridharmacakrapravartana). Skt. योगाचार Tib. རྣལ་འབྱོར་སྤྱོད་པ་ Ch. 瑜伽行派