Path to Buddhahood: Teachings on Gampopa's Jewel Ornament of Liberation

< Books(Redirected from Path to Buddahood: Teachings on Gampopa’s Jewel Ornament of Liberation) 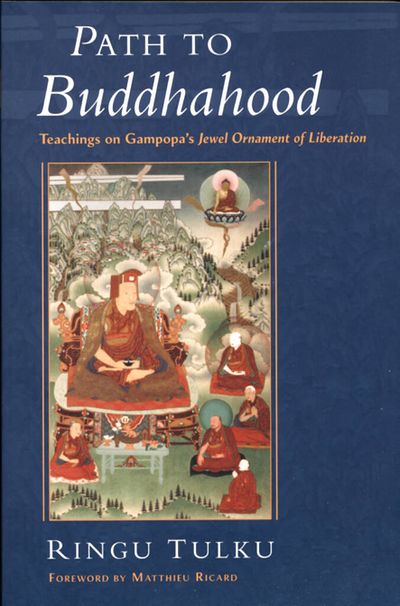 The Jewel Ornament of Liberation is regarded by all Tibetan Buddhist schools as one of the most inspiring and comprehensive works of the tradition. Written by Gampopa (born 1079 CE), the main spiritual son of the great hermit Milarepa, this important text lays out the stages of the Buddhist path and explains how an enlightened attitude is strengthened by practicing the six perfections of generosity, discipline, patience, exertion, meditation, and knowledge. (Source: Shambhala Publications

The Cause: Buddha Nature

The Dagpo Tarjen[1] or The Jewel Ornament of Liberation[2] of Gampopa is one of the most important texts of Tibetan Buddhism. In the Kagyu[3] tradition it is the main text used in the instruction of monks. It is sometimes referred to as the "merging of the two streams" because Gampopa here combines two traditions or currents of Dharma teachings, that of the Mahayana Kadampa[4] tradition and that of the tantric Mahamudra[5] tradition.

Gampopa's teachings brought these two traditions together in such a way that they could be practiced together as one experience. They quickly became one of the most important and effective foundation texts used in the teaching of Buddhism in Tibet from the eleventh century onward. The whole Kagyu tradition is based mainly on this teaching.

Gampopa was born in 1079 and died in 1153. Despite his renown as a physician, he was unable to save his wife and two children, who died in an epidemic that ravaged the region where they lived. Full of grief, he came to a deep understanding of the transitory nature of all things and the inherent suffering that this implied. He renounced the world and devoted himself totally to spiritual practice, seeking a way out of the suffering of samsara. Gampopa became a monk and for many years followed the teachings of the Kadampa geshes[6] of the time. One day he happened to hear the name of Milarepa, the famous Tibetan yogic poet, and intense devotion immediately arose in him. Deeply inspired, he began to cry and left at once to seek out Milarepa.

After many hardships Gampopa arrived near the place where the yogi was staying. Having traveled without any rest, Gampopa was by now ill and exhausted. The people in the local village took him in and treated him with great respect and hospitality. "You must be the one whom Milarepa spoke of," they said. "What did he say about me?" asked Gampopa. The villagers replied that Milarepa had predicted his arrival, telling them, "A monk from Ü[7] is coming. He is a very great bodhisattva and will be the holder of my lineage. Whoever shows him hospitality when he first arrives will be liberated from samsara and will enjoy the best of good fortune."

When Gampopa heard this, he said to himself, "I must be a very special person." Feelings of pride and conceit arose in his mind, and, consequently, when he went to meet Milarepa in his cave, the latter refused to see him. He had Gampopa wait in a nearby cave for fifteen days. When he was finally allowed to see Milarepa, Gampopa found the yogi sitting there with a skull cup full of wine. He handed the skull to Gampopa and invited him to drink. Gampopa was perplexed. He was a fully ordained monk and as such had vowed to abstain from alcohol. Yet here was Milarepa commanding him to drink. It was unthinkable! So great, however, was Gampopa's trust and devotion to his guru that he took the skull cup and drained it of every drop.

This act had a very nice and auspicious significance, as it showed that Gampopa was completely open and ready to receive the entirety of Milarepa's teachings and full realization. It is said that how much a student can benefit from a teacher depends upon how open he or she is. Although Gampopa was a very good monk, he drank the skull cup of wine without any hesitation or reservation, which signified that he was completely open and without the slightest doubt.

Milarepa subsequently gave Gampopa his complete teachings, and within a very short time Gampopa became his best and most realized student.[8] In Gampopa's teachings we therefore find the scholarly erudition and discipline of his monastic tradition combined with the total realization of a fully accomplished yogi, which he received through Milarepa.

The present commentary relies mainly on the original Tibetan text but draws upon both Guenther's and Holmes's translations where necessary.

See this book on publisher site
Add a verse

Gampopa's famous work on the stages of the Buddhist path.

Kagyu - The Kagyu school traces its origin to the eleventh-century translator Marpa, who studied in India with Nāropa. Marpa's student Milarepa trained Gampopa, who founded the first monastery of the Kagyu order. As many as twelve subtraditions grew out from there, the best known being the Karma Kagyu, the Drikung, and the Drukpa. Tib. བཀའ་བརྒྱུད་

Bodhisattva - A person who seeks enlightenment for the sake of others. In Mahāyāna Buddhism, a Bodhisattva is a compassionate being who is training on the path to Buddhahood and aspires to eliminate the suffering of all beings and take all sentient beings to the state of enlightenment. The Mahāyāna sūtras including those on buddha-nature generally have Bodhisattvas as the main audience or interlocutors for the Buddha's discourses. Skt. बोधिसत्त्व Tib. བྱང་ཆུབ་སེམས་དཔའ། Ch. 菩薩

Nyingma - The Nyingma, which is often described as the oldest tradition of Tibetan Buddhism, traces its origin to Padmasambhava, who is said to have visited Tibet in the eighth century. Tib. རྙིང་མ་

Nyingma - The Nyingma, which is often described as the oldest tradition of Tibetan Buddhism, traces its origin to Padmasambhava, who is said to have visited Tibet in the eighth century. Tib. རྙིང་མ་

Geluk - The Geluk tradition traces its origin to Tsongkhapa, who propagated a modified version of the Kadampa lojong and lamrim teachings. It is the dominant tradition of Tibet, having established its control of the government under the figure of the Dalai Lama. Tib. དགེ་ལུགས་

Sakya - The Sakya tradition developed in the eleventh century in the Khön family of Tsang, which maintained an imperial-era lineage of Vajrakīla and which adopted a new teaching from India known as Lamdre. Tib. ས་སྐྱ་