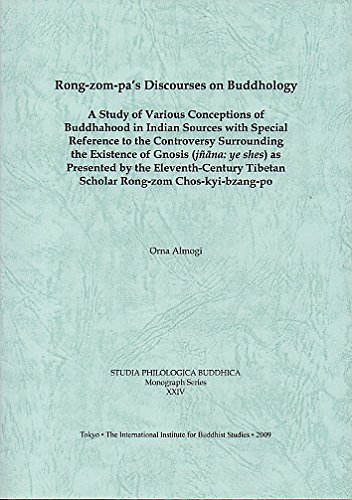 The present study looks into the investigation of buddhology1—that is, conceptions of Buddhahood found in various traditional Buddhist systems and scriptures—by the eleventh-century rNying-ma author and translator Rong-zom Choskyi-bzang-po (henceforth Rong-zom-pa). The bulk of attention will be devoted to his work titled Sangs rgyas kyi sa chen mo (henceforth Sangs sa chen mo) (An Extended [Exposition on] the Stage of a Buddha). This treatise—the only known Tibetan (and, as far as I am aware, indeed pan-Indian) work of its kind on buddhology—discusses its subject at length, focusing on the controversy about whether gnosis exists—on the conventional level—at the stage of a buddha.2 My attention was first drawn to this controversy when I was working on my Master's thesis, titled "The Life and Works of Rong-zom Paṇḍita," for which I critically edited and translated Mi-pham-rgya mtsho's (1846–1912) Rang zorn gsung 'bum dkar chag me tog phreng ba (Garland of Flowers: A Catalogue to Rong-zom's Collected Works), and prepared a detailed catalogue of Rongzom-pa's three-volume collected works.3 In his catalogue, Mi-pham devotes an entire passage to this issue, with the aim of refuting what he believed to be the wrongly held view that Rong-zom-pa denied the existence of gnosis at the stage of a buddha. Any denial of the existence of gnosis had obviously been difficult to digest by most Tibetan scholars, and the prevailing position in Tibet was and still is that a buddha does possess gnosis. Mi-pham attempts to interpret Rong-zom-pa's statements in which he unquestionably maintains that gnosis does not exist at the stage of a buddha as only referring to gnosis that had been generated on the path but not to gnosis as such, for Rong-zom-pa, Mi-pham argues, is an expounder of rDzogs-chen, a system in which what is called 'self-occurring gnosis' (rang byung gi ye shes: svayaṃbhūjñāna) features prominently. Nonetheless, from my examination of Rong-zom-pa's discussions of the whole issue, it has become evident that he did indeed deny the existence of any cognitive element whatsoever at the stage of a buddha, the sole constituent of Buddhahood being for him the purified dharmadhātu. Although he alludes to self-occurring gnosis on numerous occasions in his works, there is a salient difference between his and Mi-pham's understanding of the term: for Mi-pham self-occurring gnosis is something cognitive, whereas for Rong-zom-pa, who equates it with the dharmadhātu, it is not. Rong-zom-pa, however, does not deny that a buddha's gnosis, as mere appearance, manifests to those who have not yet attained release and thus have not yet eliminated all their delusions. A buddha, on the other hand, whose delusions have been completely exhausted, does not possess such gnosis. This position of Rong-zom-pa's does not seem to be an exceptional case. It can be shown in fact that numerous, if not the majority, of Indian Madhyamaka scholars of the eleventh century took a position similar to that of Rong-zom-pa. Furthermore, several works of early bKa'-gdams scholars that have come to light recently show that Rong-zom-pa was not the only Tibetan of his time to hold such a view. It thus appears that while the latter was indeed current among Tibetan scholars of the eleventh century, for a variety of reasons it was soon superseded by the less radical position which allows for the existence of some kind of cognitive element. (Almogi, preface, 13–14)

1. Following Paul Harrison, I employ the term 'buddhology' (written in lower case) to refer to theories on and conceptions of the nature of a "buddha" (i.e., Buddhahood), while reserving 'Buddhology' (capitalized) for an alternative designation for Buddhist Studies. See Harrison 1995, p. 24, n. 4.
2. In the present study I differentiate between a buddha (i.e., written in lower case and italicized), a title referring to any unspecified awakened person, and Buddha (i.e., written in roman and capitalized), a title referring to Śākyamuni Buddha or any other particular awakened person. (The same convention has been employed in the case of other titles: for example, bodhisattva versus Bodhisattva.) This differentiation is particularly important for the discussion of buddhology, or conceptions of Buddhahood, since some such conceptions (particularly the earlier ones) are clearly only associated with the person of the historical Buddha, while others, which commonly represent later developments in which a plurality of buddhas is affirmed, concern all awakened persons. To be sure, often there is no clear-cut borderline. In such cases I have employed both forms as alternatives.
3. A considerably revised and enlarged version of the thesis is currently under preparation for publication in the near future.

Email us to contribute
Site Guide
To top
Retrieved from "https://buddhanature.tsadra.org/index.php?title=Books/Rong-zom-pa%27s_Discourses_on_Buddhology&oldid=54172"
Categories:
Buddha-Nature