A Direct Path to the Buddha Within

< Books(Redirected from A Direct Path to the Buddha Within: Gö Lotsāwa's Mahāmudrā Interpretation of the Ratnagotravibhāga) 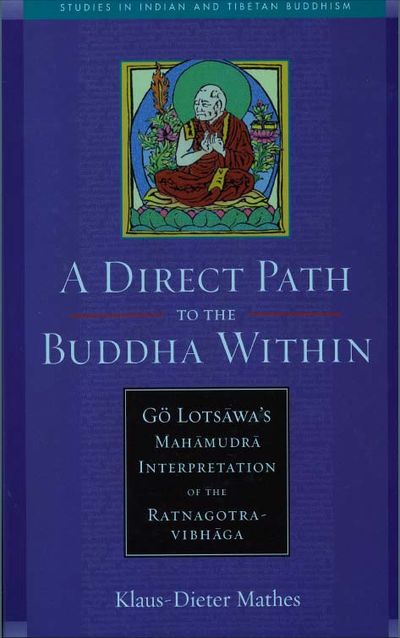 Maitreya’s Ratnagotravibhāga, also known as the Uttaratantra, is the main Indian treatise on buddha nature, a concept that is heavily debated in Tibetan Buddhist philosophy. In A Direct Path to the Buddha Within, Klaus-Dieter Mathes looks at a pivotal Tibetan commentary on this text by Gö Lotsāwa Zhönu Pal, best known as the author of the Blue Annals. Gö Lotsāwa, whose teachers spanned the spectrum of Tibetan schools, developed a highly nuanced understanding of buddha nature, tying it in with mainstream Mahāyāna thought while avoiding contested aspects of the so-called empty-of-other (zhentong) approach. In addition to translating key portions of Gö Lotsāwa's commentary, Mathes provides an in-depth historical context, evaluating Gö’s position against those of other Kagyü, Nyingma, and Jonang masters and examining how Gö Lotsāwa’s view affects his understanding of the buddha qualities, the concept of emptiness, and the practice of mahāmudrā. (Source- Wisdom Publications)

The Mahāmudrā Interpretation of the ''Ratnagotravibhāga''

The Zhentong Interpretation of the Ratnagotravibhāga

A Direct Path to the Buddha Within is one of a handful of recent densely-presented studies of Tibetan attempts to grapple with the Uttaratantra and tathāgatagarbha theory. Klaus-Dieter Mathes takes as his focus Gö Lotsāwa Zhönu Pal's commentary on the sūtra, the translation of which makes up 165 pages out of the 421 of the book (excluding back matter). Preceding the translation are three introductory chapters on the intellectual context of Gö's work. The translation is followed by three chapters that individually address Mathes' three questions: what are "subtle" buddha qualities, how is buddha-nature related to prājñaparamitā, and how does Gö Lotsāwa read Mahāmudrā into the Uttaratantra and other Yogācāra works? The book assumes a high level of understanding of the issues and is meticulous in its detail and documentation; the footnotes have footnotes.

Mathes argues that Gö's intention with his commentary was to provide a sūtra basis for Mahāmudrā, the otherwise tantric teaching of the Kagyu tradition. There is some irony in this, as Mathes somewhat blithely dismisses what he claims was Longchenpa's attempt to use the same material to find an Indian basis for Dzokchen, an otherwise tantric teaching of the Nyingma tradition. Both great masters did indeed seem hard-pressed to justify the central teaching of their tradition against criticism of Prājñaparamitā-based Madhyamaka adherents in the Sakya and Kadam/Geluk traditions. These criticisms generally centered on the issue of whether the ultimate could correctly be described as possessing qualities of its own or whether emptiness was, in fact, a radical denial of all propositions. Sakya, Kadam, and Geluk writers argued either that the Uttaratantra was provisional—a Yogācāra teaching in need of interpretation—or its teaching on buddha-nature was in line with a Madhyamaka presentation of emptiness, denying the language-positive elements of the scripture.

Gö rejected both of these positions, arguing that the Uttaratantra is consistent with other Third-Turning teachings of Yogācāra and that such teachings are definitive. This was a necessary move in order to conflate cataphatic Yogācāra doctrine with Mahāmudrā: buddha-nature for Gö is not a synonym for emptiness, but rather for "the unfabricated nature of mind" and "luminosity," core Mahāmudrā doctrine. But Gö differentiated his approach from other advocates of a Yogācāra interpretation. He argued against the notion that buddha-nature is fully formed in every sentient being (the "buddha qualities" discussion), advocating instead that buddha-nature is a potential that needs to be developed. We are not like golden statues hidden in mud, but rather like acorns that need water and sunlight to grow into oak trees.
More on this item Close

prabhāsvaratā - In a general sense, that which clears away darkness, though it often appears in Buddhist literature in reference to the mind or its nature. It is a particularly salient feature of Tantric literature, especially in regard to the advanced meditation techniques of the completion-stage yogas. Skt. प्रभास्वर Tib. འོད་གསལ་ Ch. 光明