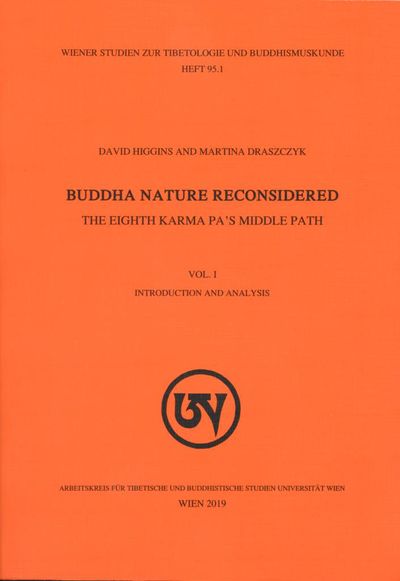 This is David Higgins and Martina Draszczyk's second book together and comes out of their first study, Mahāmudrā And The Middle Way. In their follow up they have delivered another two volumes on the writings of the Eighth Karmapa Mikyö Dorje (1507-1554) and his nuanced approach to the intricacies of the buddha-nature debate. It is an approach that combines the yogic sensibilities of Mahāmudrā with the dialectic approach of the Madhyamaka, which, according to the authors, Mikyö Dorje characterizes as the Yuganaddha-Apratiṣṭhāna-Madhyamaka (zung ’jug rab tu mi gnas pa’i dbu ma), that is, as a “Nonfoundational (or Nonabiding) Middle Way consisting in Unity.” As the authors explain,

"This nomenclature tells us much about the central philosophical aims and presuppositions of the Eighth Karma pa and his Karma bka’ brgyud tradition. As a Mahāmudrā proponent, Mi bskyod rdo rje gives primacy to innate modes of being and awareness, such as coemergent wisdom or buddha nature naturally endowed with qualities, that are amenable only to direct yogic perception and revealed through the personal guidance of a qualified teacher. As an exponent of yuganaddha (zung ’jug), i.e., unity (literally, “yoking together”), he espouses the tantric goal of unity beyond extremes, a goal grounded in the inseparability of the two truths or realities (bden gnyis dbyer med), of appearance and emptiness (snang stong dbyer med). In his eyes, this unity is only fully realized when one understands that the conventional has no independent existence apart from the ultimate and that the latter is a condition of possibility of the former. As an advocate of apratiṣṭhāna (rab tu mi gnas pa), i.e., nonfoundationalism, he resolutely maintains that all outer and inner phenomena, including deep features of reality disclosed through meditation, lack any ontic or epistemic essence or foundation that the mind can lay hold of. Finally, as a champion of Madhyamaka, i.e., the Buddhist Middle Way, the author attempts to ply a middle course between the extremes of existence and nonexistence, eternalism and nihilism. These various doxographical strands are deftly interwoven in the Karma pa’s view of buddha nature, which affirms the innate presence of buddha nature and its qualities in all sentient beings as well as their soteriological efficacy while denying either any ontological status." (Higgins and Draszczyk, preface, 14)

1. The Lamp of Fine Discernment Regarding the Tradition of the Gzhan
stong Madhyamaka Proponents

2. The Nerve Tonic for the Elderly

5. Buddha Nature and the Substratum

6. Buddha Nature and the Two Truths

The present study comprises two volumes. The first offers a detailed analysis of Mi bskyod rdo rje’s position on buddha nature in which we have attempted to fill in some of the historical and doctrinal background necessary to understand his main contributions to this subject. The second presents a selection of critically edited texts and translations of the his most important writings on buddha nature.


While the details of Volume II can be gleaned from the table of contents, it may be useful to give a short résumé of Part I. In the first chapter, we have sketched a general outline of the author’s position on buddha nature in relation to the major lines of interpretation advanced by leading scholars of his generation that he sought to creatively resolve through his own dialectical approach. In chapter two, we take a broader view of the major views on buddha nature that had developed in India and Tibet and consider how masters of the Karma bka’ brgyud tradition positioned their own views in relation to these. We are aided in this regard by a useful synopsis of Indian and Tibetan buddha nature ideas composed by one of the Eighth Karma pa’s main teachers, Karma phrin las (1456–1539); this forms the centerpiece of the chapter. In the third chapter, we flesh out the skeletal outline of Mi bskyod rdo rje’s position traced in the preceding chapters with a more detailed analysis of his central claims regarding buddha nature. This was the most painstaking portion of the book to write and may well be the most challenging for readers unacquainted with the finer points of buddha nature theory. Yet it also contains the most substantive material for understanding the author’s interpretation of buddha nature and its doctrinal foundations. Our philosophical aim was to clarify the author’s efforts to articulate and justify his tradition’s position on buddha nature in relation to parallel or rival positions held by other Indian and Tibetan masters. To this end, we identified in his treatments sixteen central propositions regarding buddha nature and attempted to elucidate each in terms of its historical-doctrinal evolution. In doing so, our objective has been not only to compile an inventory of the author’s core propositions and to compare them with those of other Buddhist scholars, but further to probe beneath the doxographical surface of these positions to get at the guiding aims and aspirations that led him to espouse the positions he did. Though somewhat more detailed than the previous chapters, Chapter Three is nonetheless indispensable for appreciating the scope and originality of the Karma pa’s contribution to the Buddhist understanding of buddha nature theory. It is thus also essential for clarifying and contextualizing the materials translated in Volume II. (Higgins and Draszczyk, preface, 17–18.)
More on this item Close

Mahāmudrā - Mahāmudrā refers to an advanced meditation tradition in Mahāyāna and Vajrayāna forms of Into-Tibetan Buddhism that is focused on the realization of the empty and luminous nature of the mind. It also refers to the resultant state of buddhahood attained through such meditation practice. In Tibet, this tradition is particularly associated with the Kagyu school, although all other schools also profess this tradition. The term also appears as part of the four seals, alongside dharmamūdra, samayamudrā, and karmamudrā. Skt. महामुद्रा Tib. ཕྱག་རྒྱ་ཆེན་པོ།