< Books(Redirected from Buddha-Nature and Emptiness) 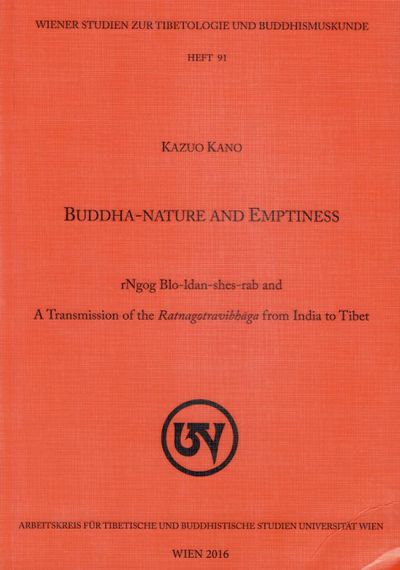 An essential study of a key text that presents buddha-nature theory and its transmission from India to Tibet, this book is the most thorough history of buddha-nature thought in Tibet and is exceptional in its level of detail and scholarly apparatus. It serves as a scholarly encyclopedia of sorts with extensive appendices listing every existent commentary on the Ratnagotravibhāga (Uttaratantraśāstra), as well as covering Ngok Lotsawa's commentarial text and his philosophical positions related with other Tibetan thinkers.

Buddha-Nature and Emptiness by Japanese scholar
Kazuo Kano
is a book of herculean research and superior writing. With apparent ease, Kano consults Chinese, Tibetan, and various Sanskrit-hybrid literature to surround the Ratnagotravibhāga and its eleventh-century Tibetan translator and commentator Ngok Lotsāwa with the necessary information to clarify what Kano believes to be their central goals. For the first, this was the systematization of Indian tathāgatagarbha literature; for the second, it was to strip out the ontological aspect of the definitive.

The book is organized historically, with initial chapters on the origin and impact of theRatnagotravibhāga in India (Kano is fully cognizant of the treatise’s history in China but the book is not concerned with that topic). These address the issues of authorship, influence, translation, and transmission. Kano mines virtually every surviving piece of Indian Buddhist literature for references to the text, and one of the remarkable feats of the book is the resurrection of the transmission lineage of the Ratnagotravibhāga in India, in particular, how he breathes life into relationships between men who lived well over a thousand years ago.

The second section of the book is dedicated to Ngok Lotsāwa Loden Sherab’s late eleventh-century Tibetan translation and commentary of the treatise that he knew as the Uttaratantra. As Kano explains, the Ratnagotravibhāga systematized buddha-nature doctrine with awareness of both Madhyamaka and Yogācāra doctrine, but without allegiance with either. Ngok, however, like all Tibetans after him, was intent on fitting buddha-nature theory into these standard doctrinal schools of thought. Buddha-nature, both Ngok (and Kano) decided, was a valuable tool in the promotion and pursuit of the Buddhist goal of liberation; yet philosophically the assertion of a permanent, existent self was problematic and needed to be explained away.

The second part of the book does for Ngok and his commentary what the first part of the book did for the Ratnagotravibhāga: Kano packs them in fascinating information about Ngok’s teachers and contemporaries, and he carefully unravels the complicated philosophical position Ngok established. This includes a lengthy chapter on Ngok’s Indian guru, Sajjana, who was also the teacher to Tsen Khawoche, a man who fully accepted the ontological aspect of buddha-nature and influenced the dzokchen and mahāmudrā interpretations of the doctrine. As a committed Mādhyamika, Ngok however was forced to confront what Kano calls the “incompatibilities between the Buddha-nature and the Madhyamaka doctrines, especially with regard to the ultimate ontological status of Buddha-nature, which has never been accepted as Madhyamaka doctrine.” Step-by-step Kano skillfully explains how Ngok did this by redefining three aspects of buddha-nature—dharmakāya, tathatā, and gotra—as resultant, intrinsic, and causal aspects of emptiness, respectively. Attentive to the historical nature of ideas, Kano ends the book with a lengthy section on Ngok’s impact on the many Tibetan Ratnagotravibhāga commentators who followed him; Ngok's translation (and the only one of six to survive) became canonical, and his commentary has been continuously read in almost every Tibetan Buddhist educational center.

The core idea of the RGV's teaching is that everyone possesses Buddha-nature. This nature does not change at any time throughout the progression from the level of ordinary beings to that of a buddha; it is merely purified from adventitious defilements. The completion of this purification process constitutes awakening.

While the RGV teaches Buddha-nature as displaying three aspects–dharmakaya, tathata, and gotra–rNgog holds that all three are nothing but one or another form of emptiness: the dharmakaya is the completely pure emptiness found at the states of a buddha; the tathata is the emptiness that pervades the stages of both a buddha and ordinary sentient beings; and the naturally present disposition (prakrtisthagotra) is the emptiness that, in pervading every sentient being, serves to give rise to the Buddha-qualities. For rNgog, the evolved disposition (samudanitagotra) is not emptiness but wholesome seeds. Further, rNgog takes Buddha-nature as the mind characterized by emptiness.

After allaying the "heat" of defilements, with the "cool rainwater" of repeated study, carried by the "clouds" of good teachers; and after moistening the "seeds" of Buddha-nature (bde gshegs snying po), you should cultivate "crops" of perfect Buddha-qualities.

The teaching "all sentient beings have Buddha-nature" is interpreted in the sense that all sentient beings are pervaded by the dharmadhātu which is characterized by selflessness. In other words, the tathāgatagarbha is taken to be the dharmadhātugarbha. Though the term dharmadhātugarbha appears in the RGVV, Kamalaśīla's interpretation seems to have been derived from a phrase in the Lankāvatārasūtra, "the embryo of the tatāgata, which is selflessness" (tathāgatanairātmyagarbha), reinforcing the notion that Buddha0nature does not refer to ātman but rather to selflessness (nairātmya).

~ in Buddha-Nature and Emptiness, page(s) 10

We can point out three characteristics regarding rNgog's position as set forth in his rGyud bla don bsdus: rNgog, basing himself on Madhyamaka doctrine, (a) identifies Buddha-nature with emptiness, (b) embraces the single-vehicle doctrine, and (c) understands the Buddha-nature doctrine as a definitive teaching.